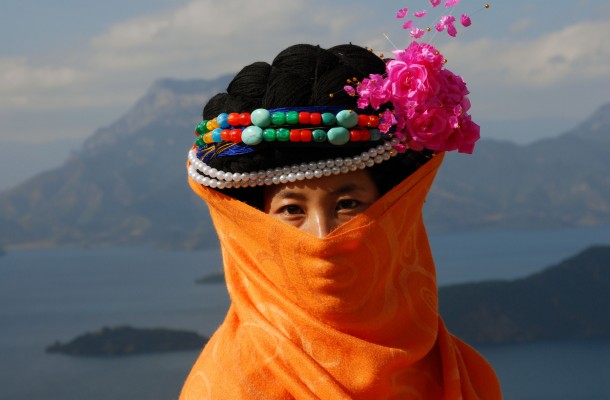 Who runs the WORLD? GIRLS. If you did not know that already, then you are a sucker. Women create miracles and life everyday. Women are Divine, sent from the Heavens above to protect and nurture the world. We are able to think in multidimensional realms, which includes a spiritual awareness. Our intuition can led us to secrets within. So, why are there not more matriarchal societies.

The Mosuo women have broken the Western mold of patriarchy. The small ethic village can be found in Southwest China in the foot of the Himalayas, at Lugu Lake. Here women are given the utmost respect. The population of the village holds about 40,000 thousand citizens.

Originally, the matriarchal system was put into place to prevent the Noble class from being overthrown.  The Noble class feared that at such a small size unborn male children could overthrow them. But, nonetheless still a WIN for women.

If a man wants a woman he knows he cannot be with her until he can support an entire family. In “The Kingdom of Women”, it is a ladies prerogative if she wants to have relations with a male or not. If she wants him to lay in her bed at night, she can most certainly kick him out in the morning with no questions asked. She is free to date and mingle whom ever she wants with no judgement on the amount of partners that may be. However, though allowed Mosuo women rarely engage in sexual activity with more than one mate, but could date multiple persons at a time. Essentially, the women have sexual freedom if they wish. It is sometimes called, “Free Love”.

The Mosuo society is not only unique worldwide, but also in its own country China. China as a whole does not appreciate the value of women. In fact, young girls are often abandoned because the norm is to value boys.  Arranged marriages are still a traditional method for most of China, but the Mosuo women are relieved by such an action.

When young girls turn 13 years old, they are inducted into adulthood with various ceremonies and celebrations. Once complete, the young girl is then able to seek a mate of her liking. These girls are taught to be proud of their femininity whereas the rest of China struggles to accept women’s existence.

I am not sure why it is difficult for the globe to understand the importance and respect women need and deserve. Even in America we have a hidden shadow that allows us to think Men rank over Women. How is this true? My fellow Men would not be alive without the mother, the womb.